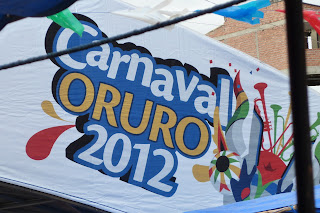 ***I would like to start this post by saying that I did actually write it a week ago when I was still in Bolivia, but between spending several days in a row traveling and then being on a farm with no internet has slowed down the uploading pictures and posting process.  Apologize for the delay and appreciate your patience!


****
Before I came to Bolivia, I have to say I knew pretty much next to nothing about the country.  I'm not even sure I could have pointed it out on a map of South America.  On top of having the opportunity to see so much of the country, one of the highlights for me has been learning about the history and culture here, from the traditional ways people dress to dance to religious ceremonies.  Sam and I lucked out with our timing in Rurrenabaque and were able to catch part of a festival where people come all over from the Beni department of Bolivia (where Rurrenabaque is situated) to perform traditional dances.  It was kind of like a mini-Carnaval, but different (and a lot hotter).

In general it has been incredibly interesting to see and learn about the traditional ways of dressing here, from the layered skirts with several petticoats, crocheted shawls, and little Charlie Chaplin-esque hats worn by (married) Arymara women in La Paz, to the pleated or velvety skirts worn to the knees and adorned by a straw hat worn by the women in areas such as Sucre and Cochabamba (and of course you will see these styles mixed in cities as well).  Sadly, from what we learned, it is tradition that could be dying out, as they are worn by campesino (countryside) women, but the next generation of women who are raised in the cities do not want to wear them.  There is such resistance, in fact, that we were told by our tourguide in Lake Titicaca (and have since noticed) that the younger generations won't even wear hats.  Instead they will either hold a piece of paper or something else to block the sun from their faces.


In addition to getting to experience firsthand Bolivian culture, I am also really glad that I was able to experience a South American Carnival.  It is such a part of the culture here that I would have been pretty disappointed to have left this trip without partaking in this important tradition.  That said, I'm glad we went to Oruro and not Rio, and it's one of those things I'm happy we did but don't feel the need to go out of my way to do again.


The costumes were incredible, though probably not what you imagine.  Tons of women of all ages shimmying (best way I can describe it) down the street wearing these sparkly, bright tutus with the coordinating traditional little bowler hat (more on that later) and high heels or boots (don't ask me how they danced down the entire parade route in those shoes, my feet hurt just looking at them).  Men dressed in matador-esque cowboy suits with bells on their boots.  People dressed in costumes meant to represent the devil and angels.  And probably one of our favorite accessories: the noisemakers made out of wooden (or perhaps real?) armadillos.  And probably one of the most entertaining groups (from our perspective) was the group singing about coca and throwing bags of coca leaves into the stands where spectators were sitting (legal here). 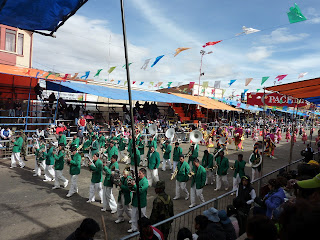 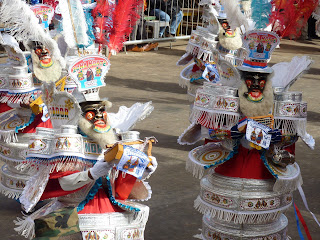 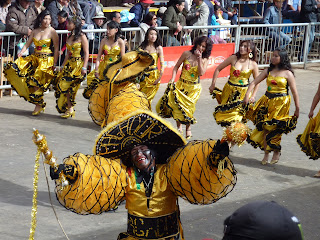 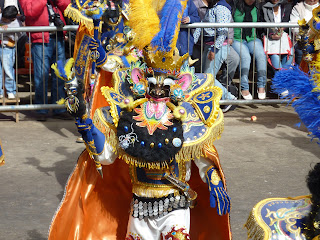 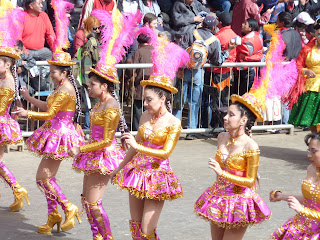 The energy was great without it be too rowdy, despite the fact that near everyone, including many of the performers, was drinking Pacenas (one of the Bolivian beers) starting really early in the morning (and our tour group passed out rum in addition to beer in the morning).


It was amazing how large the groups performing were.  I'm talking of hundreds of people per group, at least, wearing similar costumes in a rainbow of colors, and several different styles of costumes, with several bands spread out intermittently throughout the dancers. 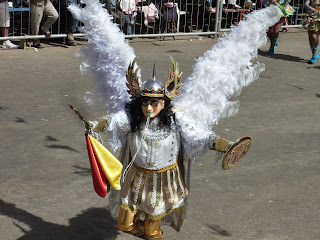 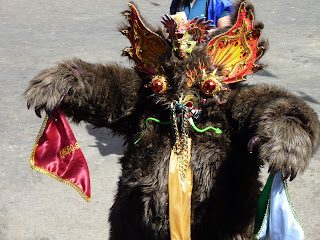 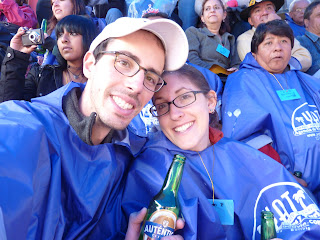 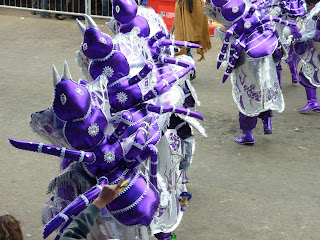 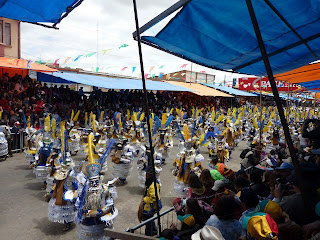 Anyway, if you should decide to ever attend Carnaval in Oruro, a few tips:


Overall, a really great experience, but not sure that I will be going back to Oruro anytime soon.