On Death and Taxis

Between all the cities we've visited in Bolivia, we've ridden our share of taxis. We probably could take the time to figure out the minbuses that cost 1 Bs. and run everywhere, but for $1-2 the convenience is worth it. I now know where all the old cars from the US go - Bolivia (or probably more generally Central/South America). It seems that when dealers in the US get cars they can't sell they put them on a barge and float them down south.

Once they arrive in Bolivia, the taxi drivers attend a special school before they're allowed to drive them. The special rules are not limited to:
-driving as fast as possible at all times
-passing, cutting-off, and otherwise overtaking any car ahead of you
-creating lanes where they don't exist (you thought the road was marked for two lanes... but you can fit five!)
-honking when approaching intersections
-honking when passing cars
-honking if you haven't honked in the last few minutes
-after-dark red lights are actually optional, as long as you honk

Here is a collection of my favorite taxis so far:

#5 The unidentifiable rattle
I'm pretty sure it was the axle... or was it the ball-bearing.... Oh enough car parts already, I had no idea what was rattling, but it sounded it important. It sounded important and it sounded like it was about to fall off. Safe.

#4 The blinged out ride
Blinging is not government regulated but does seem mandatory. You can have rims, spoilers, extra antennae, stickers of various car racing parts manufacturers that you've never bought parts from. Additionally, once it gets dark pimping should include blinking headlights, blinking runner lights, any kind of blinking lights. That way if you see two cars while waiting for a taxi, the one you want is the one that looks like a nightclub.

#3 The in-dash DVD
Given how shitty all the other taxis were, it was kinda amazing to get into a taxi in La Paz and watch music videos on the in-dash DVD player. I think both the driver and I would agree that they were some great videos (though he probably shouldn't have been watching them while driving).

#2 The fake in-dash console
"Wow, a compass and outside temperature guage," I thought. However, we either drove east the entire way or this was actually just a plastic insert illuminated by a lightbulb. 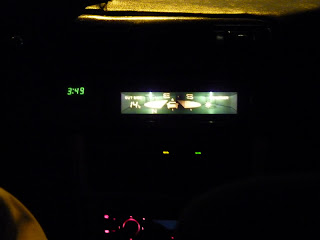 #1 The backwards car
A thousand words wouldn't do this justice. Look at this photo and tell me where the console is and where the steering wheel is (hint: they're not on the same side). 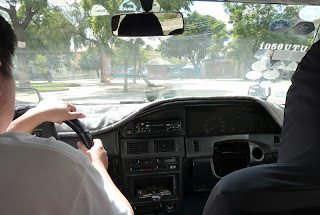