WWOOF, life on the farm is for the dogs. 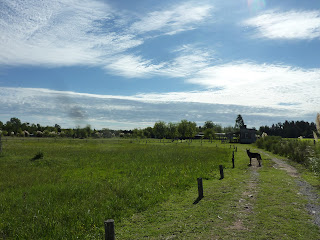 There's a reason that we invented machines and moved to the cities. Life on the farm is hard, even if it's geared towards WWOOFers and probably has less to do with serfdom of the 13th century. Still, we've survived a week, here's what we've been up to:

We arrived last Wednesday in the afternoon, on our lovely Argentinian bus (see previous post) and took a cab over from the bus terminal. When we arrived the hosts were still in town, but we were greeted by the other WWOOFers who came to say hello. There were:
-Lilly and Jenny - two cousins from Ohio who were WWOOFing through Argentina
-Darcy - an Australian dude from Melbourne who had just started his trip
-Andy - a guy from Philly

All of them had already been on the farm for 3-4 weeks. On first impression was that we had arrived in heaven. The weather was a lovely 70, and there was a breeze blowing across the pampas plane.

However, as we got to learn more of the details we realized we were in for a tough time.

Tangent: My only other WWOOF experience was in 2005. Ask me about it sometime, it was one of the best experiences in my life. I was in Bordeaux, France on a vineyard. We had four delicious French meals a day. We worked hard from 6am to 1pm, but with the beautiful weather, the homemade food and the wine, I had a great time.

First, our accommodations are in a WWOOF cabin. It’s a small brick house with a kitchen, one bedroom and bathroom. At the peak there were 6 of us living in it, which meant there were three people in the bedroom, two people on two twin mattresses and one person in a kid's tent (Andy took a turn the first night - G-d bless him). The place has a "summer camp" feel to it - which to me means more bugs and it’s dirtier than I'm used to. Though the girls had recently scrubbed the kitchen and bathroom, there were already lines of ants marching around the walls and some making their way to our food. 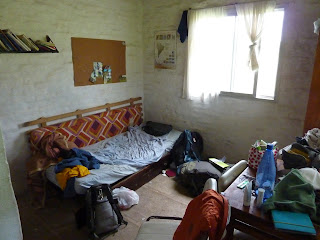 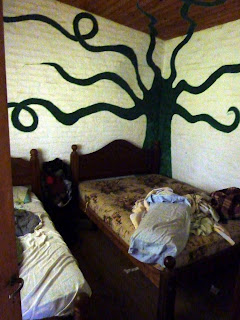 Ah, the food. If you recall, I was expecting French cuisine. Needless to say I was disappointed. The family provides lunch, we were told. Lunch was usually rice with veggies, or a pizza, or on the weekend when the restaurant is open, empanadas. As far as breakfast, they provided crackers, and for dinner we are stocked with pasta, rice or lentils. For everything else we’re on our own. The other volunteers had bought eggs, some fruit and some other snacks. Oh, and we were also able to pick some peppers or other veggies from the small garden (which was pretty much limited to peppers or unripe tomatoes).

Finally, we learned about the work schedule. Over email, we had been told that it would be 4hrs and that often there wasn't a whole lot to do.

Tangent: We also had been told we'd need to pay $100 USD for each person, to help offset the cost of food that they were providing. When I had gone back to look at the WWOOF site for a description of the farm, I saw that they had been kicked out of WWOOF back in January. At first I was really worried, because I wasn’t sure what constituted a bad enough offense that WWOOF would kick out a farm, so I emailed the head of WWOOF Argentina. She replied back saying that they had kicked out the farm for requiring monetary donations from WWOOFers. For those not familiar, the WWOOF arrangement is simple: you work, and the host feeds and houses you. Unfortunately it seems like many people are exploiting this arrangement and trying to make money.

However, the work schedule wasn’t 4hrs, it was instead 6hrs. Typically the WWOOFers were working 7-10am and then 4-7pm, but it was flexibile so you could work earlier or later if you wanted, as long as you added up to 6hrs.

So far I was very apprehensive – decent accomodations, alright food and more work than I expected.

Soon the family arrived, and we met Sergio, the father, Judith, the mother and their two little kids, Facu and Laura. The family was very friendly and their two kids were adorable, so we decided to stick it out a day.

That afternoon we were put to work, I went off to help Andrew with cutting and trimming bamboo, and Bev helped the two girls working on the mud wall for one of the restaurant buildings.

That night we made a pasta dinner with some veggies and had some wine. The other WWOOFers were great company, so we had a fun evening eating and talking about our travels.
-I worked on weeding the vegetable garden 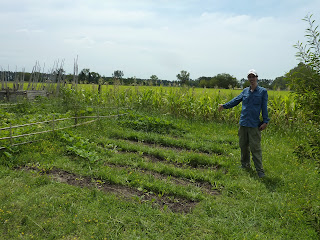 -Bev worked on the mud wall – which involves mixing mud, grass and wood chips with water and then smearing them on a wall, layer by layer to build a traditional wall. Surprisingly these walls are great insulators, keeping cold in the summer and warm in the winters. 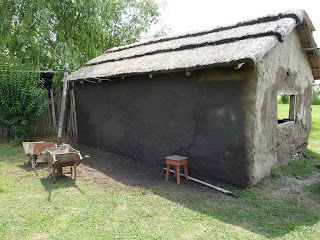 I cut down bamboo with a saw and hacked off the branches with a machete
-I gathered firewood.

Tangent: While I was gathering firewood a man arrived on a bike and with Sergio went into the sheep pen. They spent some time chasing the sheep and eventually he caught one, and carried it over to the chicken coop. I assumed he must be a veterinarian because one of the sheep had been sick. When I came back a bit later to get more firewood the sheep was hanging vertically and he was already skinning it, so much for veterinarian. Later that night Lilly, Jenny, Darcy, Bev and I went to the restaurant at the farm, something they had been meaning to do for a while. It was a lot of food. It was a price-fixe $69 (~$17USD) which included bread, salad, three types of empanadas, followed by three types of meat from their brick oven, and dessert. Since we were feeling classy, we also got champagne. 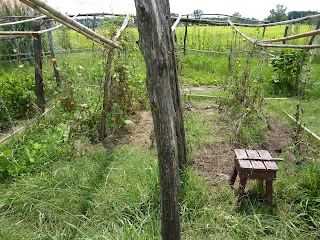 -I cut down these large, prickly bushes that apparently had invaded the pampas from Scotland. With a machete in hand I hacked down the bushes and then raked them into a pile.
-I had a fever Sunday night, so I stayed in bed all morning while Bev continued to weed the garden.
-We did nothing, because there was a torrential downpour on Monday night, with really intense winds. When we woke up everything was soaked, and half of the property was large puddles, so we got the day off because nothing could be done outside.