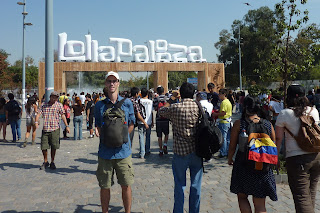 Last Sunday Bev and I went to my first concert festival - Lollapalooza Chile. It was a two day event, but since my parents were in town on Saturday we decided to inaugurate ourselves with one day. It was a packed day, and we were very glad we went. Definitely hoping to do more festivals back in the US. So here's the my ranking of all the bands we saw from worst to best. 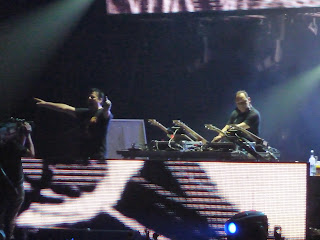 Up until today, we didn't like these guys because their show was tired, their beats were outdated, they played too loud and didn't really interact with the audience. But then today we uncovered something else when we were talking about the concert. "Don't they do 'Block Rockin Beat'" asked Bev? (No, turns out that's Chemical Brothers.) "I had thought they do 'Battleflag," I said (turns out that's Low Fidelity Allstars - thanks Google). So we had both gone into the show excited for bands that we thought we liked, but turns out that we had no idea who they were. Sorry guys, our bad, but still you get #10. 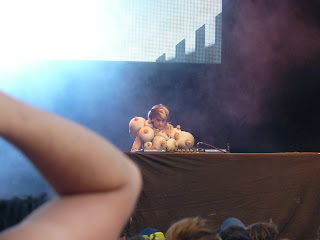 No number on this one, because one cannot rank Peaches. Peaches is Peaches, meaning we got exactly what we had expected - a ridiculous dj/artist/performer. Her songs are awesomely awful, and yes, she is wearing an outfit made entirely of fake inflated breasts. For the sake of the post I had to put her somewhere. 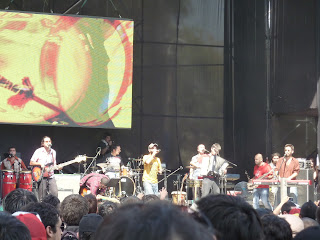 Cumbia is really popular around Latin America. As such it has spawned groups that try to hip it up, like Juana Fe from Chile by adding hip-hop and rock elements. They're a self described "Fusión / Latina / Rock". The problem with Cumbia is that after a few songs it tends to sound the same, so a 45-min set was hard to digest. 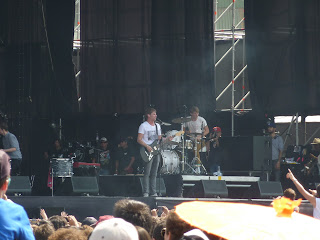 I know! Hey, this is a tough ranking. Foster The People had their hit song, which admittedly is super catchy, but their other stuff sounds nothing like it. While they are acceptably musical and poppy, we just didn't dig their stuff. 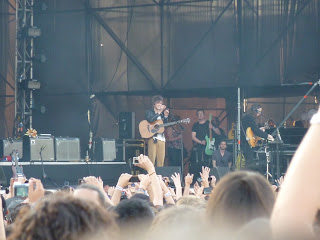 What?? Blasphemy?!?! I know, I'm upsetting the Billboards. Same problem as above. MGMT is more musically sound and trained than FTP, but again not our taste. Also, they had "new stuff"... which was a bit out there. 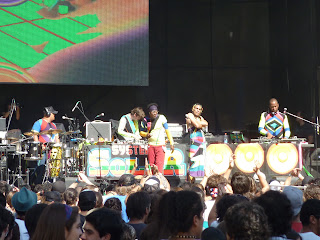 These guys from Colombia, rocked a self described on MySpace as "Alternativa / Electrónica / Latina" beat. But better described as super catchy and dancy tracks. Check out their jam Bienvenidos. 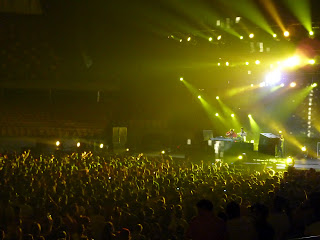 Both these guys rocked the house! I hadn't heard of Perryetty, until we realized it was actually Perry Farrell, lead singer of Jane's Addiction and the founder of Lollapalooza. 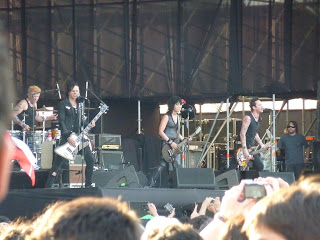 This was a last minute change. I had JJ at #4, but you know what? I think it takes more awesomeness to rock live music than DJ-ing (sorry Yuriy - we can debate this). So at 53, I was damn impressed with how much energy JJ had. She rocked the entire stage and did so really well. Everyone knows "Bad Reputation", and she had a score of other good songs that I recognized but didn't know where hers. 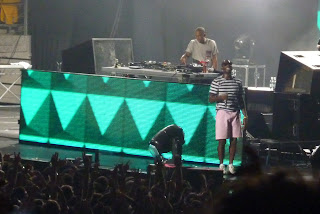 I didn't recognize the name, but I've just looked him up and realized that he did the hit "Written in the Stars". We either missed that song, or didn't stay long enough, but while he was performing he was on point - working the crowd, working the stage and executing flawless rapping. 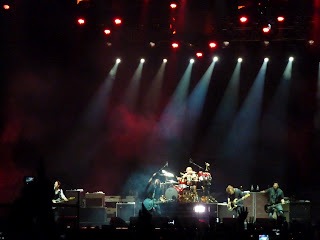 This was the big headliner, the act that everyone waited around for until it got dark, long after MGMT had finished playing. The entire crowd stood at the stage or camped out on the lawn for the Foo Fighters. Boy did they put on a kick-ass show! They gave it 100% for two straight hours, and I'm talking about as one song ended, they would kick into the next song. They rocked out really hard, with great interaction with the crowd, running around the stage and awesome solos. I couldn't believe just how many of their songs I know.. and in turn how many famous songs they're responsible for. Hopefully we'll get to see them again in the states.

P.s. Bev has asked me to mention that everything started on time, which was damn near a miracle given how many acts they were managing simultaneously. Kudos to Lollapalooza.

All in all a long day, but totally glad we went!

More photos from the day:
Posted by Unknown at 6:12 PM