Bev and Sam's Wild Ride, or How We Survived Our Trip to the Jungle (Just Barely)

Sam and I just spent the last week volunteering at Villa Carmen, a nature reserve/biological station situated in Manu National Park in Peru, in the Amazonian region of the country. Now, spending a week in jungle sounds pretty adventurous, but little did we know that the biggest adventure would be our trip to and from the reserve.

Just a glimpse of what the ride was like.


Villa Carmen is located in the tiny town of Pilcopata, 8-10 hours from Cusco (though this trip take much longer if there are mudslides, which are apparently not that uncommon). There are three ways to get there from Cusco: take a bus that only leaves on Monday, Wednesday, and Friday at 5:00 am; take a shared van; or hitch a ride on a truck. Since we were heading to Villa Carmen on a Sunday, that ruled out the bus, and we weren't about to hitch-hike, so our safest bet was to take a shared van. This may sound simple enough, but there is limited space and to ensure there would be room for both of us the administrative assistant would reserve seats with us and help make the arrangements to get there. We were informed to bring snacks, as we would be making very few stops along the way--thankfully we had our trusty Skippy crunchy peanut butter my sister had brought to us from home. We were also told that the ride would be about 30 minutes to 1 hour in the mountains, and the rest of the ride would be relatively flat. Sounded good to us!


By 11:00 am on Sunday morning we were squeezed into a 10-passenger van with 11 other passengers, Sam and I being the only gringos. 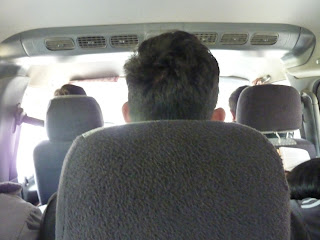 Of course there were no seatbelts and there were several children sitting on their parents' laps, but at this point we were used to the lack of safety precautions. We climbed higher and higher in the mountains and before we knew it we were high above Cusco. 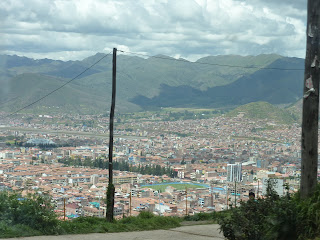 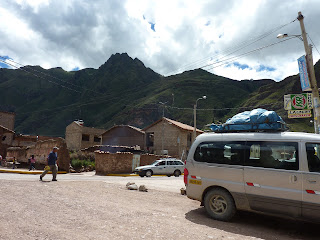 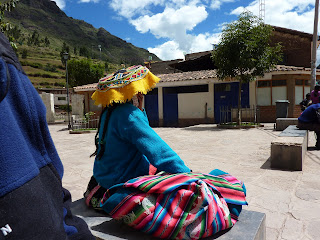 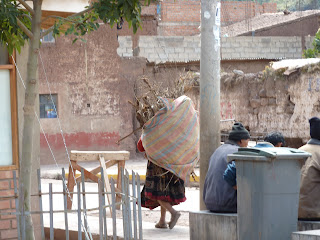 As we took off again at close to 1:00 I remembered thinking, "Wow, I'm amazed the road is paved. I remember reading that only 10% of the roads in Peru are paved." I figured out this point I should get comfortable as we still had 7 hours ahead of us and to take a break from looking at the view and read for a bit. However, the road quickly became very bumpy and very windy, making it to difficult to read and I decided it was time to watch the scenery unroll some more. 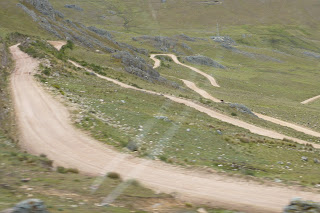 As I looked out the window I noticed that we had climbed even higher in the mountain on a gravely road. There was about three feet between us and the side of the mountain with a steep drop and no guard rails. And were going quite fast. Also, keep in mind we were in a van, on a road much better suited for a 4X4. "Maybe it's best if I don't look out the window," I thought to myself. However, I couldn't tear my eyes away from the road. In the back of my mind I was thinking that perhaps somehow watching might prevent us from careening over the edge.

At one point we nearly hit a donkey as we rounded a turn, and later some dogs started chasing our van. I was afraid we would either hit them or skid off the road in an effort to avoid hitting them.

Thankfully after hours after ascending higher and higher through farm land, it was time to make our way down. Yay, we were finally on our way to the flat road and done with the terrifying drive curving through the mountains!


However, no sooner than we had finally reached the bottom of the mountain range and stopped for a quick bathroom break we started to climb up another mountain range. 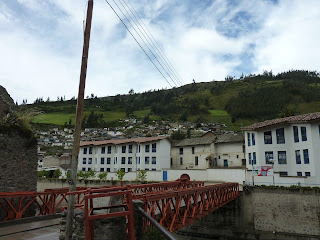 At this point the landscape changed drastically and before we knew it we were in the jungle. I'm not sure high up we climbed the second time around, but I do know we were above the clouds, so I imagine we were quite high (again on a narrow, windy, unpaved road). After another hour or so of climbing up the second mountain range, we started to make our way back down, passing periodically over streams, under waterfalls, and through cave-like tunnels. Periodically as we rounded a bend our driver would honk manically as a warning to other potential drivers that we were coming around. This, unfortunately, did not prevent us from nearly colloding head-on with several trucks who were also speeding along the windy road.


Quite often we would reach an impasse with a truck and one of us would have to back up to make room for the other one (mind you, this was still along the cliffs, and at this point it was starting to get dark). Finally, after driving in the dark for over an hour the road flattened out and we saw lights in the distance. Civilzation! We started dropping off passengers in little towns along the way, and at around 7:30 we reached Pilcopata. After stopping to let off the rest of the passengers and picking up a couple families with a bunch of children, we were on our way to Villa Carmen. We made it safely without hitting a truck or driving over a cliff!


The trip back was just as terrifying, but bumpier and far dustier, plus at one point another van came speeding around a bend, forcing our driving to slam on the brakes, causing the other van fishtail past us and nearly skidded over the side. Sam and I celebrated surviving the trip with pizza in Cusco last night and are very happy to be done (hopefully) with crazy road trips on unpaved roads. However, our week at Villa Carmen was great, so I think it made up for the trip (although Sam, I am sure, would beg to differ). More on our volunteer experience in the next blog post!
Posted by Unknown at 3:31 PM