The main reason there were so many gringos in Cuzco is of course the famous Inka temple of Machu Picchu. There are two ways to get there, the 4-day grueling trek or the beautiful 3-hour train ride. However, regardless of whether you get there smelly and exhausted or refreshed just having had quinoa salad Machu Picchu makes one hell of an impression. You're left wondering: how the hell did they build this damn thing here in the mountains?? 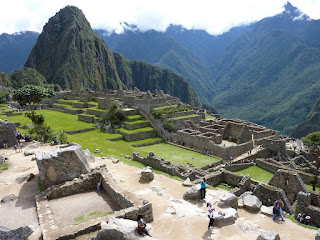 Since we weren't doing the crazy hike, our itinerary was to take the afternoon train to Aguas Calientes (the base town for Machu Picchu), spend the night, take an early morning bus up to Machu Picchu ruins, hike Machu Picchu mountain (I don't know why they can't have different names for things), and then take the late train back to Cuzco.

We booked tickets on Peru Rail, which btw if you ever have to buy tickets on you'll be SOL to do so online. Fortunately there is a ticket office in the main plaza of Cuzco. We were shocked at how expensive they were, $140/pp roundtrip! Taking a cab to the train station, we were greeted by a beautiful train, waiting outside a very clean and organized train station. 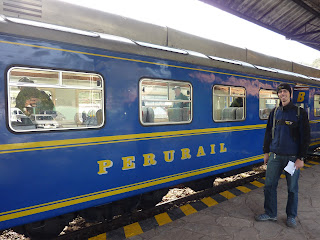 The train itself was the "Vistadrome" service, which meant that in addition to the regular windows on the sides, there were windows on the room. In total it was a 3hr journey through the countryside, with lots of awesome pictures, here:

After a few hours we arrived in Aguas Calientes. AC is a very small town, about one square mile in size. It's covered in hostels, hotels and restaurants geared towards tourists. We spent the afternoon walking around town, and eating. We didn't stay out too late because we were getting up very early at 4:30am!

At 4:30am, we stumbled out of our beds, ate breakfast (which the hostel was very used to doing) and got inline for the buses for Machu Picchu. There were quite a few people there already, but they had the buses leaving constantly we were on one and off in a few minutes. The ride up to the ruins was about 20 minutes, up a windy path zigzagging along the face of the mountain. Fortunately there were guard rails... but it was still a one lane road. We arrived at the entrance, had our tickets checked (btw, don't forget your passports - they won't let you in without them... we watched some couple arguing their way in because they hadn't listened to the instructions). Once past the guides offering their services, we were at Machu Picchu! 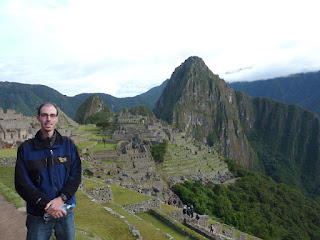 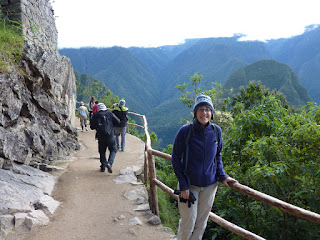 Our first goal was to find Machu Picchu mountain, because we had tickets admitting us for hiking between 7-11am. The mountain in the background of the photo is Hayana Picchu, so I figured Machu Picchu was the other one opposite. Unfortunately there weren't any signs to let us know if we were on the right track. So we found a Japanese couple with a map (which was in Japanese), and they were able to confirm we were on the right track. 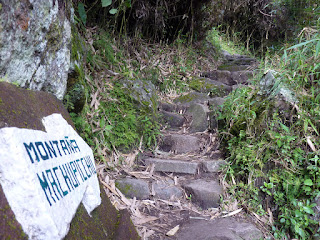 From here, past a ticket checker man, we hiked up Machu Picchu mountain for an hour and a half. Look at us! Hiking!! The views of Machu Picchu were spectacular, and the path (unlike Huyana Picchu) wasn't as trecherous. 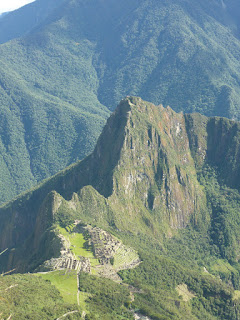 I made it most of the way up, but the last 1% before the top got real narrow and I decided to skip it.

On the way down, our legs were so shaky that we had to keep walking and couldn't stand still. Once back at the ruins, it was already 11am and hot, so we spent about an hour walking around. 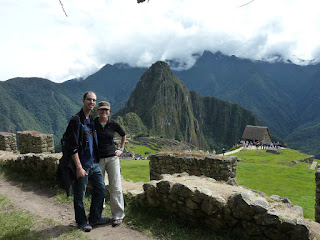 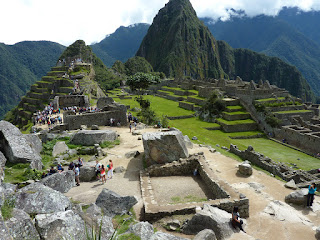 However, without a guide everything just looked like houses made of rock. So by the time we were both hungry and hot we decided to head back to Aguas Calientes for lunch. We spent the afternoon at the market, watching a soccer game, and eating. Later that night we took the train back to Cusco.

More pictures from Machu Picchu:
Posted by test at 7:16 PM