Bag (Almost) Lost and Room Given Away at the Hostel!

I'm a bad news first kinda person, so it's nice that we're not starting out our South American Adventure (SAA) with smooth sailing. After a delicious, but super overpriced last meal in the States of lox and bagels at Barney Greengrass, we made it to to our gate at JFK without any problems. Our COPA flight to Panama City was only a few gates from the flight going to Moscow, so we got some great Russian watching in while we savored our last pints of Sam Adams. You know you're Russian if: you talk on your cellphone at least once at the bar, your face defaults to a scowl, and you have a taste for horrible grey sweaters or other "fashionable tops" (that don't seem to be in fashion outside of Moscow). Tickets checked, we got into our seats and took off for a 5hr flight. We deplaned, and somehow beat most people on our flight through immigration. Now it was our turn to wait for our bags. Mine came out not too long after, but Bev's didn't (even though we dropped our bags off at security together). We watched bags come out and people from our plane claim their stuff. Four different times the carousel was filled with bags, but still no sight of Bev's. It was now about a half hour later, and most of the other bags were gone, but still we waited for Bev's. An airport employee stopped by to confirm we were waiting in the right place, since we had been there so long. Yep, carousel #1. We waited and waited, and only when it seemed like bags from the next flight began to appear, we saw it. At first we weren't even sure it wasn't a mirage. Finally Bev's bag arrived!

The taxi situation was a bit hectic, but our self appointed guide from the airport was on a mission to get us a cab. He seemed to know where our hostel was, and explained something to the cab driver before we were wisked away into the night. I did feel a bit better when we stopped by a soldier and the cab driver told him "two people, American, Hostel Panama by Luis". Somehow knowing we were being jotted down on his clipboard made me feel safer. From there we drove down a dark highway, with other cabs and cars. We stopped once at another military checkpoint. More highway, and then through a tollbooth, across from which sat a fairly nonchalant gentleman with an M16 rifle. We later asked a cab driver why there were so many troops and police everywhere, and he told us that it was likely because of the upcoming holiday that the army was boosting its perceived presence (makes sense, since I'm guessing there's lots of tourists and for some reason we feel better when we see soldiers with machine guns). Anyways, we made it to our hostel without any problems, that was until we got to reception.

"Sorry, we gave away your room because you didn't confirm you were arriving." What?! "We sent you two emails to confirm you were coming, and because you didn't reply we gave away your room." What?! "You're welcome to sleep on the couches in the common room, and then tomorrow we can put you in your room." Their emails said something vague about them canceling your reservation if you don't arrive by the time you said. I have no idea what time I said I'd be arriving. So we'll split the blame 50/50. "So what do we do," I asked, "is here a hotel nearby?" "There's a Sheraton five minutes away." For those of you who've seen a very agitated Bev (VAB), I must add for color that there was in fact one behind me this whole time, alternating between "you didn't read their email??", "I'm not staying in their common room" and "you better figure something out!". I tried looking up a few hostels, but it was 9pm at this point, we were in a remote part of the city, and it was dark out. Neither of us really had the energy to look up other options, so we were off to the Sheraton. We walked down the sidewalk of a busy street, which seemed to be turning into a highway, and just as I was giving up hope, I saw the bright red lights of the Sheraton sign. Now we just had to figure out how to get there up a dimly lit hill, and through a shady parking lot. I wasn't mentally prepared for the dark night walking yet, and was more shaken up than Bev. I'll be honest, I was thinking about throwing in the towel. But we made it through the lobby, and after paying $$$, we dropped off our bags and crashed on the giant bed.

Here are some photos for those of you that have made it this far: 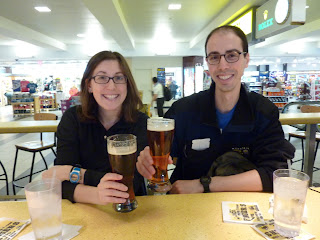 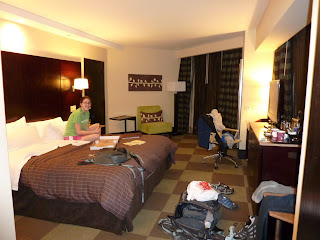 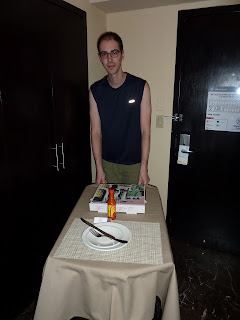 Cheese pizza and apple juice on a rolly cart 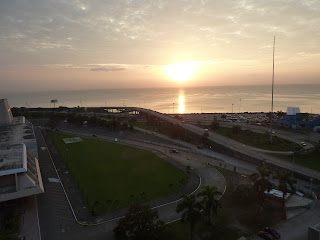 Gotta give it to the Sheraton - great view of the Pacific