Kinda Feels Like the US, Except People Speak Spanish

After spending a luxurious night in the Sheraton and eating a tasty but pricey buffet breakfast, Sam and I took off for Casco Viejo, an old section of Panama.  We mostly just meandered around the neighborhood, stopping for awhile in Interoceancio, a pretty interesting museum that gives the history of the Panama Canal and got a glimpse of the presidential castle, before stopping for a late leisurely lunch at this little restaurant called Rene Cafe where you have the choice of chicken, fish, pork, or vegetarian, and then they give you all this delicious food for $8.50.
We made our way back to the Sheraton to grab our stuff (we would find out the next day we were vastly overcharged for our taxi back) and return to the hostel.  Panama by Luis is pretty much your stereotypical hostel.  A few private rooms and many dorm-style rooms, a single shared bathroom on our hall with no hot water (thankfully it's so hot here that taking a cold shower isn't so bad), and a "free" breakfast that consists of 2 pancakes (and no more) and coffee, but the staff is very friendly and helpful.


We were taken to our private double room which I will describe as cozy.  We were just getting comfy when the girl at the front desk knocked on our door and apologized, she had taken us to the wrong room, which was apparently more expensive than the one we had booked, and moved us to the correct room next door, which was even "cozier" than the first.  The double bed takes up about 75% of the room space (the room is also about half a foot wide than the bed), so it's rather tiny, but at least we have our own room. 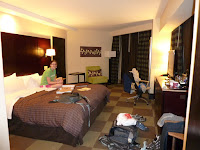 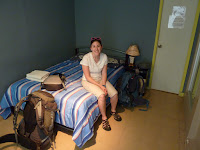 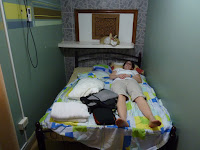 Talk about an upgrade from the Sheraton to our hostel room!
(Bottom left picture is the room we were initially given; the picture on the right is the correct room.)


We then set off for the grocery store, and I swear it was just like going to a grocery store in the U.S.  Almost all of the products were American (Kraft macaroni and cheese, General Mills cereals, etc.) and most of them were in English, with the exception of the Frosted Flakes that were called something like Zucarillos (I totally just made that up).  And the best part of Panama?  They use U.S. currency!  So except for the fact that everyone here speaks really fast Spanish that I cannot understand, it is just like being home, chicken buses and all.


The next day we decided to venture  off the Panama Canal (we can't go to Panama and not see the Canal) and made sure we checked with the hostel staff first to see how much a cab would cost.  (I would like to add that the reason we keep taking taxis is they are pretty cheap, and we have yet to figure out the bus system here.)  We decided to go to Miraflores Locks, one of the three sets of locks, which had a tourist center with an exhibit on the Canal (not as good as the museum we went to the day before), a short movie that played in both English and Spanish on the history of the Canal, and seating where you could watch the locks in action.  After exhausting the exhibit & movie, we hung out until the arrival of the afternoon ships at 2:00, and what a show it was.  As the first huge ship that had previously carried cars from Japan to the United States entered the locks, someone narrated what was happening and some technical information about how the locks work.  When the ship entered the area, the announcer said, "And now they will lower the ship very fast!"  And by very fast, what he really meant was about 15 minutes to lower 27 feet.  At first we couldn't even tell if the boat was being lowered.  (Sam will be posting a video later if you want a glimpse of the action.) After that we went to the Amador Causeway, which juts out into the Pacific Ocean and gives you beautiful views of Panama City and the ocean. 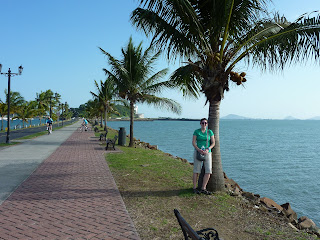 
Today we wandered to Panama Viejo, where one can find various ruins.  The rest of the day we have spent being lazy around the hostel, something we realize neither one of us is very good at, before heading out tonight to ring in the Año Nuevo.

Email ThisBlogThis!Share to TwitterShare to FacebookShare to Pinterest
Labels: panama