It's only 6 days ago that we arrived in Panama, but tonight we're flying out of Panama City to Santa Cruz, Bolivia. First off, Happy New Years! Wishing everyone an adventurous, prosperous and healthy 2012. So what have we been up to since the 31st?
Saturday night we went out with hostel people to a club called People's. It was great finally hanging out with some of the people we've seen around the hostel or in the kitchen. We had some great conversation, watched the city erupt in fireworks as people set them off all around us, and dance to American tunes. We turned in early at 2:30am, whereas our compatriots came back from 6-8am. We'll do better next time.


So who's staying at our hostel? It's hard to nail down because at least a third of the people are always in flux, but here's my best estimate:
-Ronnie - the very friendly and talkative Brazilian, who has single-handedly convinced us to skip Carnival in Rio. After he colorfully described it as a hugely overpriced hell on earth with thousands of people packed everywhere, we realized that maybe a day might be both a better decision mentally and financially.
-"The friendly Australian" - Every hostel has at least one.
-Eulises - the disenchanted pilot. He's been working out of Panama because of a new job and hasn't gotten to see his family back in the states for the holidays.
-"Motorcycle Diaries Man" - I don't remember his name, but he's a middle-aged Canadian who's purchased a motorcycle and has been waiting for all the government paperwork to clear so he can get his plates and then bike to Canada. From there he's planning to go down to the tip of South America and bike the rest of South America.
--Actually we had another "Motorcycle Diaries Man" stop at the hostel. He had been on his journey for a while already.
-"Super Friendly Austrian Girls" - They were super chatty and friendly, and a lot of fun to have around. It was actually quite weird, because though the spoke German, they were completely socially competent and fun.
-"American college girls" - The loudest, and most outgoing of the whole group. They were quite a riot and great chatting to. They partied hard, especially since they're not even 21 yet.
-An ever changing group of "awkward Germans". Yes, there have been several different groups of Germans, but they're all a bit quiet, reserved about their perfect English vocabulary, and not super social.
-The "Rude Israeli Girls" - Fortunately they were only here for one day, but I couldn't stand them already. According to Boris, Israelis have a really nasty reputation across the continent for being rude, antisocial, pushy. This has already led to one conversation about Jews, and we had to quickly distance American Jews from Israeli Jews.


Sunday kicked the year off with a whole string of failures, so fortunately that means that all our badluck is now out of our system for the year. We had been itching to get out of the city and go to the beach, which is at minimum a 2hr trip. So we made our way to the bus terminal, only to find that apparently everyone in Panama City had had the same idea, and after waiting in line for 45 minutes we gave up. 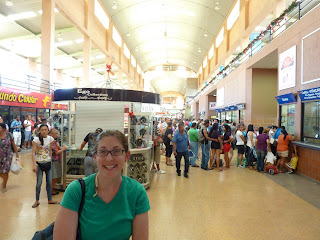 Fail x1 - Lets just say most of those people are also waiting to go to the beach.


Instead we went back to the Causeway, because there's a ferry that goes to a nearby island - the closest beach from the city (not safe for Moms: I guess our cab driver on the way over had partied a little too late, because periodically his eyes would close and we would begin to drift ever so slightly into oncoming traffic. We did our best to keep him awake, and after a few times of yelling "senor!" we finally made it). Unfortunately all the tickets were sold out. Fail x2 As a last resort, we walked over to the public pool we had seen there the previous day and hung out and swam there for a bit. We then decided to catch a movie, but told the taxi driver the wrong mall, and ended up back at the bus terminal - which also has a mall. However it only showed dubbed movies. Fail x3. We then decided to try navigating the buses, and got on one we thought was going in the right direction. However after an hour, we realized we had ridden off the map, and had to be rescued back to our hostel by cab. Fail x4


Yesterday, Monday was a national holiday, so most things were closed. However, went to the fish market, which has a famous cevice stall. 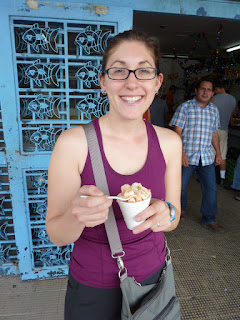 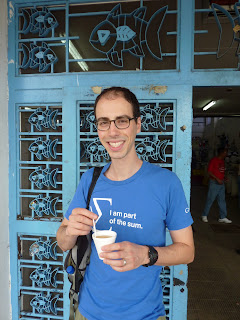 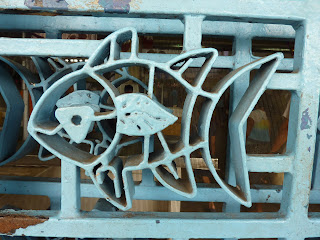 From there we walked around Casco Viejo again, and walked all the way down the boardwalk to the Multicentro Mall, watched Adventures of Tintin - which was entertaining, and chilled at the hostel.


Today we finally made it to the Parque Natural Metropolitano, where Bev and I voluntarily hiked around for almost two hours. Yes, one more time - we hiked. I know, I'm just as shocked as you are. We didn't find any monkeys like the brochure promises but it did have a great view of the city. 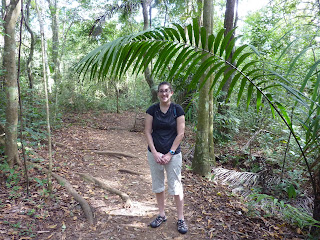 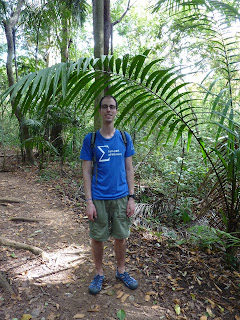 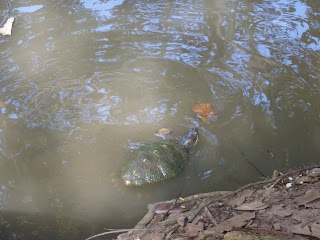 It's no monkey, but still kinda cute. 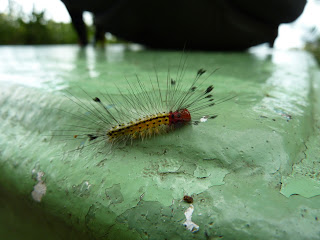 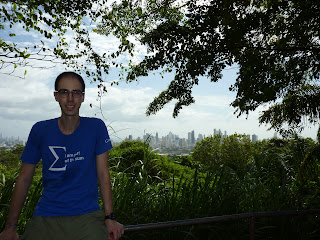 
In other news, I finished the third book of the Hunger Games - so now I can discuss just how annoying Katniss Everdeen is. What book should I read next?
Posted by test at 10:36 PM