Summertime, and the Living's Visaee..

After one last afternoon chilling at the hostel in Panama, Sam and I returned to the airport to set off for Bolivia.  After breezing through check-in and security (liquids apparently undetected), Sam and I had several hours to stroll around and browse through the duty-free stores, when I asked him what he did with the money he had taken out to buy our Bolivian visas (we had been told to have crisp $20 bills to pay for it). He replied it was in his checked luggage - with all the documents he would supposedly need to get through immigration in Bolivia.
Those who know me can imagine how calmly I reacted to this.  We found the nearest information kiosk and in broken Spanish I explained to someone our predicament and would it be possible to retrieve our bags so that Sam could get his documents?  (I realized later while trying to explain that we had an letter stating our purpose for our visit I kept using the word that means letter of the alphabet, it's any wonder that the woman figured out I actually meant "documents.")  Of course our bags would have already gone through security and were who knows where in the airport, so that would unfortunately not be possible.

I have to say, although his relaxed, "Don't worry, we'll figure it out" attitude can be quite unnerving to me in moments such as this one, it's a good thing that one person in this relationship can keep calm under these types of situations.  Another uneventful plane-ride and 4 1/2 hours later we landed in Santa Cruz, Bolivia at 12:45 am local time.  Now for the moment of truth.  Would we be able to make it through immigration without Sam's passport photos, invitation letter from our host family, official letter from the City of Cambridge stating that we had not been arrested?  After filling out the most unofficial visa application I have ever seen and handing over $135 each to pay for our visas, they asked for passport photos.  I had mine and I told them Sam's was in his luggage.  No worries, a few minutes later we had our visas!  Apparently everything the Bolivian government lists as necessary to obtain a visa is totally unnecessary.  And we had no problems locating our luggage, as by this point we were the only ones left in the customs area.


We hop in a taxi cab and make our way to the hotel (it is now about 2:00 am).  The hotel looked nice enough from the entrance.  Then they led us up to our room.  Think of the cheapest motel you have ever stayed in, and that was probably nicer than our room.  Really hard beds, decor that looked like it had not been updated in several decades, overlapping pieces of dirty carpet, a single overhead fan (where was the air conditioning we had read about?) and an electric shower with wires poking out all over the place.  At this point we were really too tired to care, and we crawled in our beds, to be woken up around 7:00am by people walking around (the window to our room faced out to the hallway and would have been too stifling hot in the room to close it). 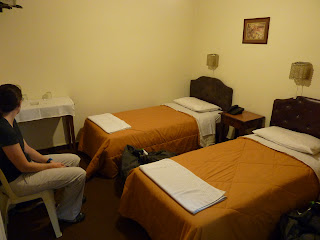 Gotta love the electric shower with the wires poking out and duct tape holding everything together.


We sleepily decided to venture down to breakfast (an assortment of breads and some muffins), and then asked about switching rooms to one with air conditioning.  Twenty minutes later, and voila, new room that felt luxurious after the room we had just spent the night in.  The beds were bigger, mattresses more comfortable, shower looked less sketch, nice view of the pool instead of facing out to the hallway, and most importantly, AC!  As the temps are currently in the high 90s during the day and don't seem to cool off too much during the day, a place with AC is pretty key.


Anyway, seeing as this blog post is getting quite long, we will post soon about our time in Santa Cruz, as well as more pictures.