Catching up with the Feldmans

It has been a lot longer than we intended since our last post, but part of the adventure includes not aways having access to reliable e-mail.  (I have to say, though, that it is pretty amazing how even the smallest towns--including some of the most remote towns in the middle of nowhere Bolivia--have many internet cafes.)  Also, I must apologize in advance since this post will not have pictures, in fact we will probably not be able to post pictures until Wednesday when we return to La Paz and have WiFi again.


Anyway, when we last left off, we were in Sucre.
I had drafted a blog post that went into detail as to what we did our second week there, but since we have done so much since we left I will just summarize.  Second week was spent visiting several more museums (including Museo Universitario Charcas, where we saw some ancient artifacts, mummies, dolls dressed in traditional clothings from different regions of Bolivia, and lots of religious art; and the Museo de Arte Indígena, that has lots of incredible samples of Bolivian textiles and I had the opportunity to watch someone weave in person), more Spanish classes, finally going out our last night (yay for heathy stomachs!) and hanging out with some of our fellow classmates and our host family´s niece and nephew (from Santa Cruz and Chicago, respectively).  Also, I have to mention this documentary we saw called The Devil´s Miner, a fascinating and sad film about a 14-year-old boy who supports his family by working in the mines in Potosi.  Sam and I had been considering doing a tour of the mines in Potosi since apparently that is the thing to do there, but after watching the documentary--and knowing we would be breathing in toxic fumes--it didn´t feel right to us.


Last Saturday we left for the mining town of Potosi, about a 4-hour busride from Sucre and our first long-distance busride, which was thankfully quite uneventful and we were the only gringos on the bus.  The highlight of the ride, though, was watching Sam blow rasberries at this adorable baby sitting next to him who seemed to be really fascinated by Sam.  When we got to Potosi, it started to hail and was really cold (although it was warmer than Boston at the time, and no snowstorm). 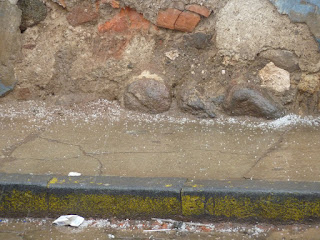 We decided to go to the Casa de Monedas, which was the old mint, and has many interesting artifacts.  Unfortunately we were adjusting to the higher altitude (Potosi is at 3977 meters), making it hard to focus on our tour which was in Spanish (I made for a terrible translator for Sam). 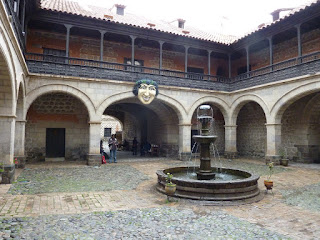 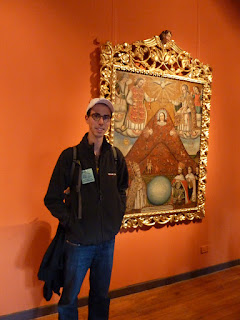 the Virgin Mary depicted as the main mine of Potosi 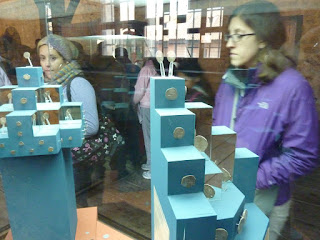 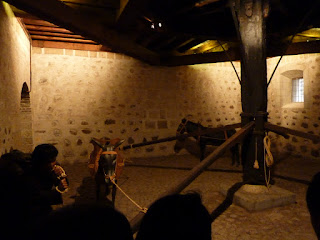 the presses were donkey powered, which was sad
because the donkeys died a lot from working 24hrs a day 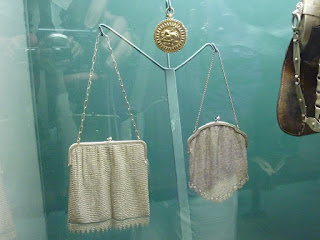 Even though the weather was miserable and we were fatigued from the altitutde, we found an awesome European-style cafe to hang out for a bit before heading back to our freezing hostel which required us to sleep in several layers. 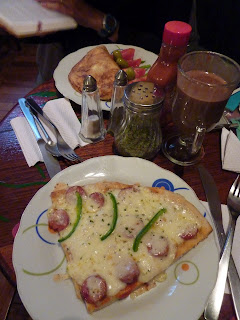 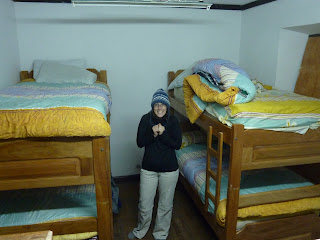 there wasn't any heat in the hostel

The next day was another busride farther south to the town of Uyuni.  In contrast to the other busride, which had been entirely paved, most of the road was still under construction--i.e. unpaved--making for a bumpy ride, but the scenery was beautiful and we had our first experience with a Bolivian rest stop (picture to come later).  However, we had nice big comfortable seats and these crazy footrests that come down, giving you lots of leg room.  Also, unlike our other busride, this one was almost entirely tourists, which initially I found strange, but not nearly as strange as arriving in Uyuni to find it swarming with tourists and pizza restaurants. 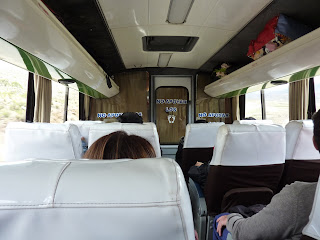 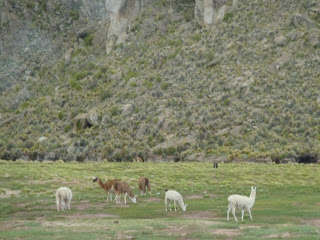 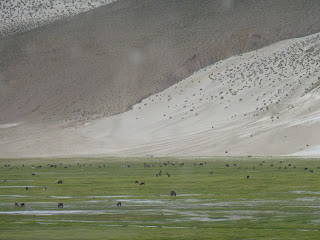 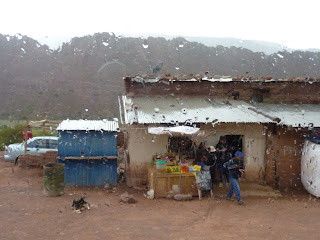 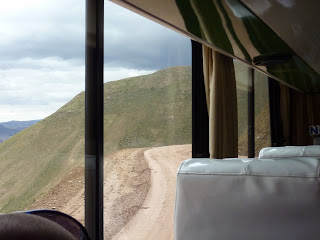 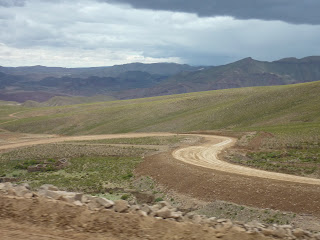 they're gonna be paved any year now...

Uyuni is basically a little ghost of a town with two main streets and connected with about 5 smaller streets.  The main "plaza" is filled with travel agencies and restaurants geared toward tourists.  We stayed at a very basic and inexpensive but really nice hostel that included solar-heated showers (hot and lots of water pressure) and the best Bolivian breakfast we had eaten so far.  Although it was still bread, they were two of the fluffiest rolls I had eaten, served on beautiful trays, and included both coffee and juice!


After that it was off to our tour, which true to Bolivian time was 45 minulate showing up.  Then we found out that when we had booked our tour they has misinformed us that we would be spending the first night of the tour in Oruru, which meant we were not properly packed and had to therefore bring both of our huge backpacks with us.  Thankfuly they were able to strap it to the top of the jeep under a huge tire, and it was off to the Salt Flats!