Salt Flats and then Some!

So when our 4x4 finally arrived, the lady at the travel agency said, ¨ok grab the stuff you're taking for the next 3 days, and lets go.¨ Huh? We hadn't packed, because the sister agency in Sucre had told us we were coming back that same night. Whoops! Some time later we threw our big backs on top of the 4x4 and were off to the salt flats. For now this post is sans pictures, but tomorrow I'll do my best to add a bunch because this tour is best seen, not read.

Getting on the dirt road outside of town our driver crossed himself several times. I guess the extra help couldn't hurt (it did help later in the tour). An hour later we arrived at the salt flats, or the Salar de Uyuni (wikipedia link). Everywhere you look is white. The ground is salt, hard to walk on and blinding from the sun. We took lots of pictures, as you do. 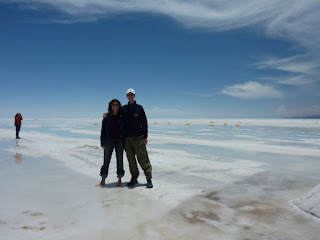 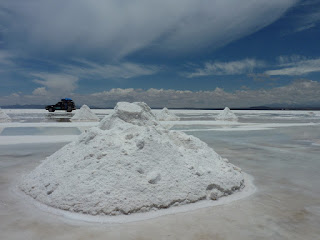 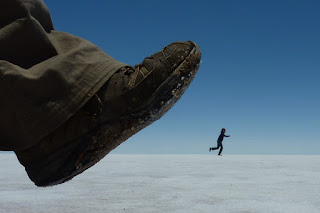 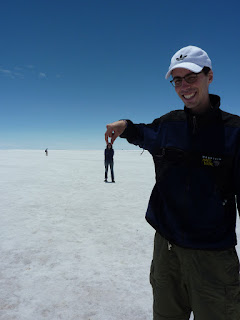 After lunch, which magically appeared out of the back of the 4x4 we were off again. This time back through Uyuni and off to the train graveyard. Here there were lots of wrecks of trains and some cool swings and a see-saw made from scraps. 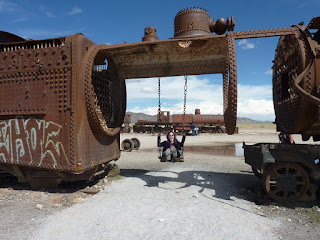 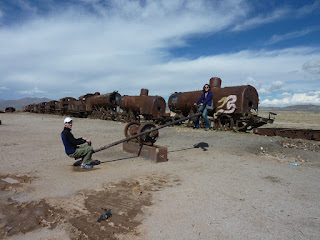 From here it was off to our accomodations. Little did we know that we had pretty much seen the highlights of the tour, except we still had 2.5 days to go. We drove down dirt road, through fields, and over mountains. The countryside of Bolivia is very varried, but it was still a lot of sitting in the car. Around 6pm we got to our accomodations in a tiny one street town. One street town in the middle of the desert of south-western Bolivian surrounded by mountains. It was very quaint, but the food was decent and the shared room for our group of 6 was comfortable, though very cold.

The next day we were off in the morning for more driving. Lots of driving. Eventually around lunch we arrived at our destination - Laguna Verde (aka the Green Lagoon, there will be other colors later). It was quite cool, and in the background was a large volcano, and past that was the border with Chile. 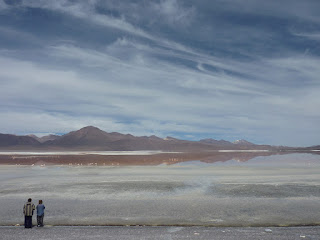 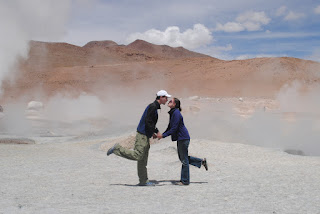 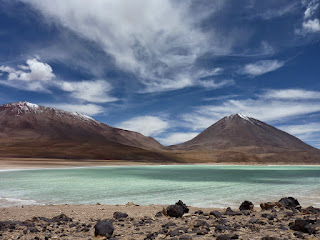 After the lagoon we drove back and stopped at the thermal springs. It was overcast and a bit rainy, so only two brave girls got out and swam in the springs. We had anticipated it would be a hard exit into the cold Bolivian air, but they said it was great. After the springs, we were off... or at least we drove for 200 meters when...

Giant dust cloud. Had we hit something? Had the driver braked suddenly? The driver got out, walked around the 4x4 and disappeared under the back right side. A minute later he reappeared and pulled out a piece of the car about 3 feet in length. It looked pretty necessary (my guess is that it's the piece that goes from the rear-right tire to the rear-gearbox on a 4x4... technical name?). He tried the car, but oddly it wouldn't go. He fussed around under the car for 10 minutes and then told us it would be a while and we should head back to the thermal springs where there was a house for tourists selling food/tea/etc. Of all the places the car could have broken, this was a pretty lucky one, especially since most of the day we had been driving in the baren dessert (maybe our driver's crossing from the day prior had come in handy).

An hour later there were more guys working on the car, but it wasn't closer to being fixed. A 4x4 from another group passed, and their driver agreed to take two of the girls from our group to the lodgings where everyone was staying. The argentinian couple, Bev and I waited for the next 4x4. Twenty minutes later another 4x4 passed by, and they took Bev and I. It was a tight squeeze with 8 people in a 4x4 designed for 6, but it was better than being outside. 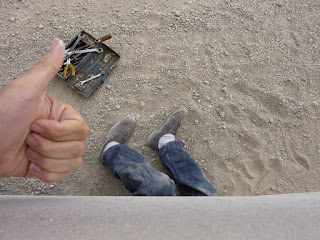 We arrived at an even more remote house than the night before, this street didn't even have a town or a street for that matter. When we got out we asked where the other two girls from ¨Oasis Tours¨were. The ladies working there didn't know what we were talking about. Did they know Richard, our tourguide? They had never heard of Richard. At this point we got the feeling that we were in the wrong house. We decided to put our stuff down and try to figure things out. Unfortunately there was no cell service to call the agency or Richard (if we had his number, which we didn't). One of the drivers offered to drive us back to town in the morning. We started to freak out a bit. The girls from our group had left quite some time before us, but still hadn't arrived.


Fortunately at that point a 4x4 pulled up and our compatriots hopped out. It turns out they had gone to see some sights that we had already been to earlier. We sighed, unpacked and got ready for dinner. Our last two group-mates arrived a few hours later in a fixed 4x4!


In the morning we were off again, this time heading back to Uyuni. On the way we stopped by several lagoons, saw flamingoes and more countryside. 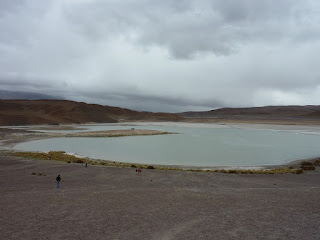 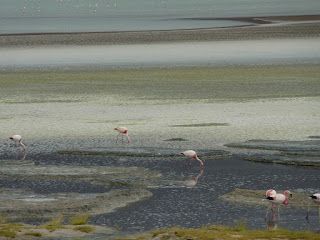 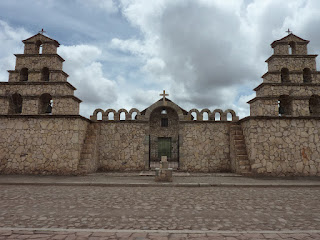 Bev just mentioned to me that I forgot to talk about the llamas. There were lots of llamas everywhere. Big llamas, baby llamas. 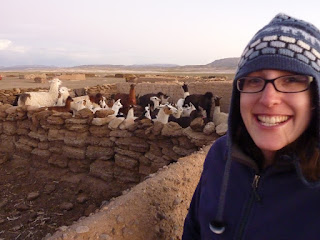