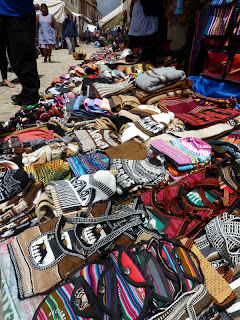 Yesterday we took a day trip to the town of Tarabuco, Bolivia, about 1 1/2 hours (on our very slow bus) outside of Sucre.  On Sunday they have an incredible market where people sell their handwoven textiles (and commercially-produced ones); yarns hand-dyed in vibrant colors; knitted sweaters, ponchos, hats and gloves made out of alpaca yarn; dolls wearing traditional Bolivian clothing; instruments; some jewelry; and produce (including huge bags of coca leaves).


The route was very rural with not much between Sucre and Tarabuco except for hills; some clusters of homes; the occasional person, family, and/or donkey carrying supplies; and a random Coca-Cola shack on the side of the road literally in the middle of nowhere. 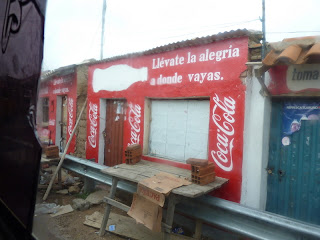 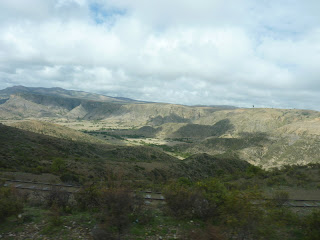 When we got to Tarabuco before we entered the market we were told by our tour guide that if we had to go to the bathroom this was our only opportunity.  For one boliviano you got a bunch of toilet paper and the chance to use a modern-looking toilet that in order to flush you had to fill a jug of water from a huge barrel of water just outside the bathroom.  During this time Sam's lock on his backpack managed to jam (eventually he had to have someone back in Sucre cut it--I guess that's one way to prevent pick-pocketing). 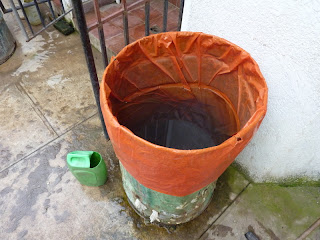 After that we entered the market and our guide told us about the people in Tarabuco--how when the Spanish came they were forced to become Catholics but retained some of their religious practices as well, and as a result they speak both Spanish and Quechua; what people in the area when and how you can tell if someone is single based on how they wear their hat (actually quite handy, no guesswork needed); and the uses of coca leaves.  Like the other cities we have been to so far in Bolivia, there is a central square, and in the middle of this one there is a statue of a Quechua person killing a Spanish soldier, ripping his hear out with a horn and eating it. 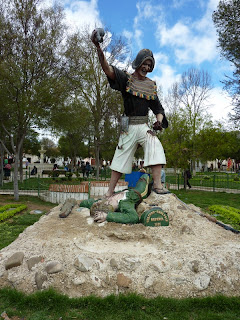 After that it was time to wander around the market.  Our first stop was a "store" where they were selling products made from alpaca yarn--I ended up buying a wrap with a traditional Bolvian alpaca motif and reversible hat where a young girl who appeared to be in her teens was very attentive and helpful (it is amazing the sales finesse the kids here have!). 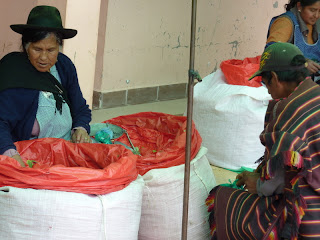 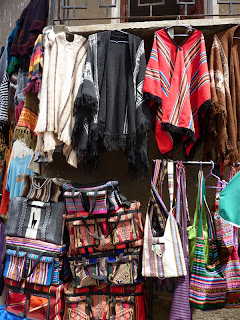 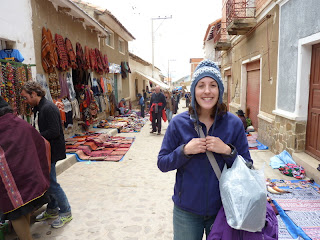 Next Sam was drawn to a woman selling textiles.  We ended up talking to her for awhile--each textile told a story and she explained what each one meant.  Sam decided on one that tells shows people preparing for a festival (if I understood her Spanish correctly, it was the 8 of September)--getting water, sacrificing a cow, dancing. She also showed us a picture that include herself, husband, and daughter standing next to her loom. 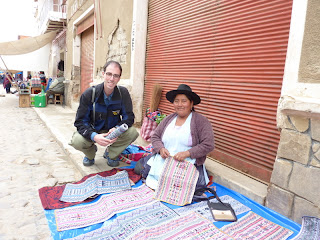 After that we wandered around for awhile, being stopped often by older women trying to sell us hand-tied bracelets that reminded me somewhat of the ones I used to make at camp when I was younger.  Eventually Sam gave in and purchased two of them.  Generally it was very tempting to go purchase-crazy--I was amazed at some of the things people made, particularly tapestries that depicted life in Bolivia--and because everything was so inexpensive!  In the end I ended up purchasing for myself the wrap & hat, a bag, and a bracelet, for a grand total of 240 Bolivianos, or $34!

Finally a traditional lunch at a restaurant (supposedly the only safe one to eat at in Tarabuco) where we talked to a couple from Buenos Aires who were on our tour.

When we got back to Sucre we went to our host family's home.  Like most of Bolivia, Sam and I really did not know what to expect, but I think our family's home far surpassed our expectations.  They have a beautiful home with an open courtyard when you enter with a garden and a great view of part of Sucre from the roof.  The family is incredibly nice, and thankfully I have had no problems talking to them!  But more about them later.
Posted by Unknown at 3:20 PM