Living in Sucre is not what I pictured Bolivia to Be


Call me ignorant, but I had a different mental picture of what our accommodations in Sucre, Bolivia would be like. I'd been told that Bolivia was the poorest country in South America, and I had seen the mud houses from the road, so needless to say I was very surprised when we entered our host family's house. 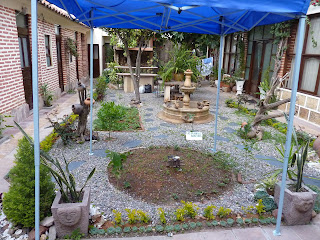 The first patio when you walk in off the street (minus the tent).

Coming in off the street, through a large wooden door, we walked down their driveway and into a beautiful indoor courtyard with all sorts of plants and rocks. In the courtyard is a fig tree (which is delicious) and an apple tree. Off to the right was the main house, and upon going in we found a large living and dining room full of modern comforts, couches and beautiful tile. Through the living room was another courtyard, off of which is an eat-in kitchen, again with all the modern comforts and a bedroom and bathroom. Going upstairs in the courtyard, you get to a large patio off of which there are four more bedrooms, ours included. Our bedroom is in the back, with large windows, closets and our own private bathroom with hot-water shower (yes, electric - but it's kinda amazing how quickly the water heats up).


A bit about our family. Nos padres (parents) are Olga (in her 50s) and Jorge (in his 60's), they have five children, one daughter and son that live here, and three other daughters (one of whom currently lives in Chicago). Olga is a former accountant, an avid cook and now teaches gastronomy in a local university. Jorge is a retired agricultural engineer who traveled a lot of the world (including a few weeks in Israel in the 80's - he really loved the kibbutz he visited) focusing on factories that produce milk, and now is an off-and-on consultant for local projects. The son is studying international relations with a specialization in Chile and the youngest daughter is getting her masters in business, having completed her undergrad in political science as well. They are all kind, smart, warm and humor me with questions as I try to practice my Spanish (not so much for Bev, since she's very advanced). They even laugh at my jokes, when I'm sure I sound like the equivalent of, "today they cancel school activity, they afraid of our volleyball" (?).


Monday was our first day of class, and we woke up early and were greeted at 7:30am with a small breakfast consisting of bread and tea (the main meal here is lunch). We then made our way over to our first day of classes at the Latin Academy of Spanish, which is located about a ten minute walk from our host family's house. Again, beautiful courtyard and a warm and welcoming building. 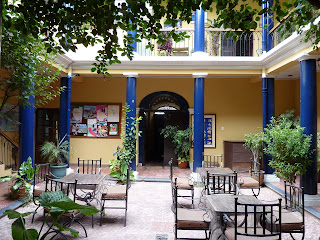 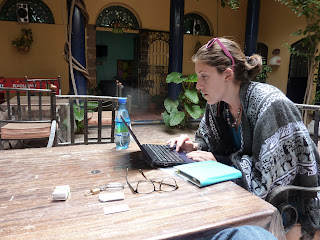 Upon registering we received placement exams. I poked at mine for a while, made it through a quarter of it, and handed it in. From there I was walked to the beginner class, which had a very friendly Swiss couple and a funny and informative teacher named Sara. Four hours later we were done, and Bev and I talked about our classes. She told me that when she handed in her test, the proctor said, "oh, you'll need to do another one." At first Bev was worried that she had messed up, but then the proctor handed her an additional test because she had aced the first one. After that one, she received another. And after that another. In the end Bev was placed in the advanced class with one other student, an older gentleman from Iceland.


After the classes Bev and I made a small pact to try to speak to each other only in Spanish. That's been mas o menos (so-so), with us staying strong for a few days and lapsing. Despite that my Spanish abilities are improving dramatically, and though I curse all the crazy grammar rules and the fact that there seem to be more irregular verbs than regular, I'm happy to be able to stumble my way through conversations with our host family and around Sucre.


We'll post soon about what else we've been up to this week in Sucre in addition to our Spanish classes.

Click for more pictures of Sucre...
Posted by Unknown at 5:37 PM