It has been a busy week in Sucre.  Sam and I are definitely really happy that we decided to do our language classes here.  On top of staying with an amazing host family, Sucre is a beautiful city with overall great weather (like spring in Boston when we actually have spring) and many things to see.
After classes we often check out a new museum or site.  Monday we went to the Museo Nacional de Etnografía y Folklore, where they have these crazy (and somewhat frightening) masks from around the country.  Tuesday we went to the Mirador, which sits high on one of the hillier streets of Sucre and has incredible views and a café that overlooks the city. 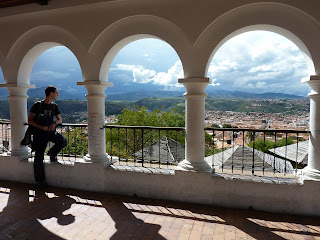 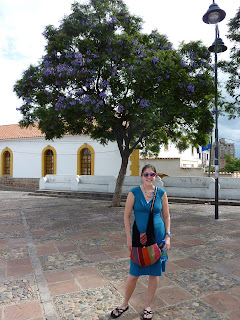 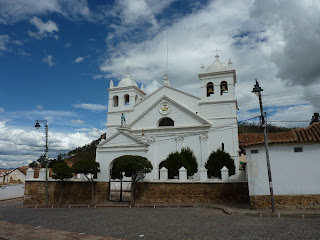 Wednesday we went to La Casa de la Libertad, a museum that has paintings of past presidents, copies of important documents in Bolivia's history, and interesting artifacts.   That evening we went to a café called Joy Ride, popular among both tourists and the locals (their motto is “No solo para gringos!”) that shows movies every night whose subject matter is a mix of both local culture and pop cult ones (such as a Greece sing-a-long and showings of Trainspotting).  We saw a strange artsy movie entitled “Bolivia” which was about a Bolivian man who works illegally in a restaurant in Argentina because he can’t find work at home after the Yankees burnt down the coca fields where he had previously worked.  What was interesting about the movie to learn about the tensions between the countries (apparently Argentines are not fans of Bolivians).

Thursday was a low-key afternoon followed by Salsa classes at school.  Friday was among one of the most interesting days, as we went to this famous cemetery in the city which was also a gorgeous park where apparently couples go on dates and students go to do their homework.  It is certainly unlike any cemetery we have ever seen.  There are several mausoleums for what imagine must be some very well-off families, all in different architectural styles, and blocks where people are "buried" above ground.  On the outside of their block there are windows where family members have put flowers, pictures of the deceased, and objects of importance to that person.  We also stumbled upon the small Jewish section, which was more along the lines of what we are accustomed to (i.e. people buried in the ground). 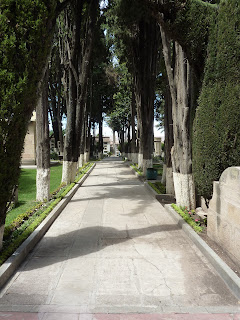 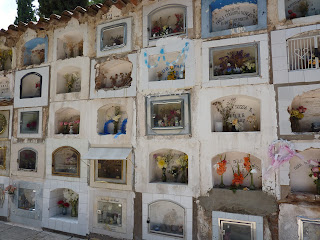 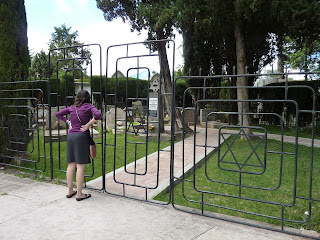 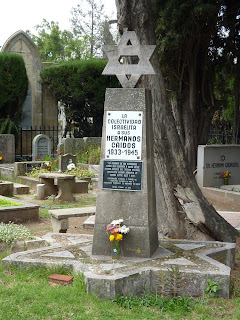 After that we went to the Castillo de la Glorieta, and old castle on the outskirts of the city (and our first successful attempt at taking a local bus on this trip!) where we saw some cows lounging about outside and is right next to a military school. 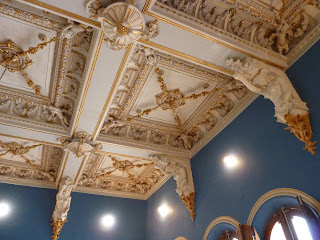 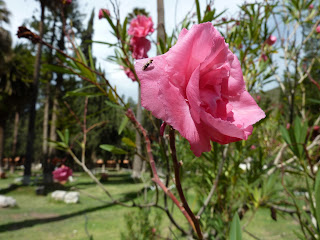 That evening we took a cooking class at the school where we made a dish popular in Cochabamba (a city nearish to Sucre) called Pique a lo Macho, which was essentially a plate of french fries covered in stir-fried beef and sausage and sauted onions and tomatoes and served with hard-boiled eggs.


It is usually quite spicy, but we requested it to be mild.  Nonetheless, a tasty but heavy meal for us as we were still recovering from the inevitable traveler's sickness that hit us on Tuesday (thankfully very mild and it was nice to have a "mom" to make us chicken noodle soup when we weren't feeling well).

Thankfully we are finally recovered and have been able to be a little more adventurous this weekend.  Yesterday we went on an incredible 3-hour hourseback riding tour just outside the city in the mountains.  Our very knowledgeable tour guide taught us a lot about the neighborhoods we passed through and let us do things at our own pace. 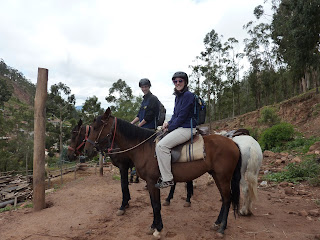 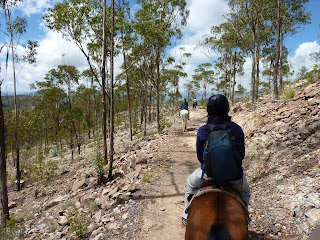 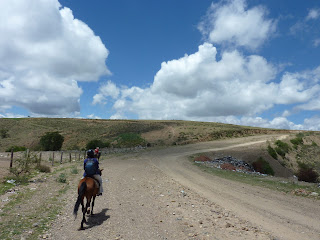 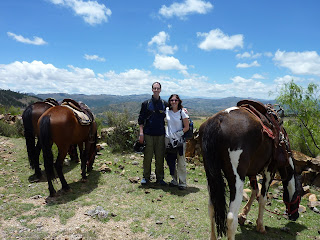 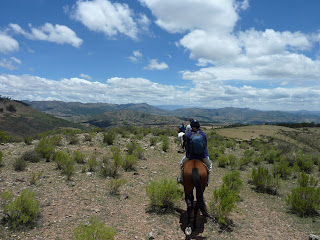 And finally today it was off to the dinosaur park to see some fossils and lounge about in the beautiful weather!

In addition to seeing a lot of the sites, I have learned so much about Bolivian history and culture, which for me has been one of the highlights of the week.  Spanish class is both an opportunity to review grammar and have informal conversations ranging in topics from fúbol (apparently Bolivia used to have the top-ranked team in South America, not so much now); food; military requirements; and Bolivians' thoughts on the current president, Evo Morales.  Lunches with our host family are filled with interesting discussions about politics, religion, drug wars, you name it.  And best yet, it's all in Spanish!
Posted by Unknown at 5:31 PM