Tiwanaku, Lake Titicaca, and a Change in Plans

The beauty of extended travel is that, unlike a week-long vacation, you don't have to plan everything out ahead of time and you can decide to change your plans at the last minute.  Sam and I had been planning for awhile to go Brazil after Bolivia--in fact, had we gone with our initial plans, we would be there right now. 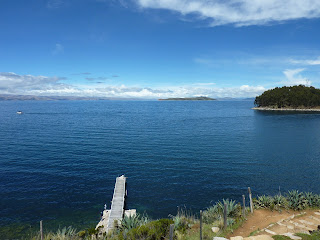 Initially we were going to celebrate Carnival in Rio.  After we realized it would cost us $2000 just for lodging, and in a hostel no less, we decided to nix that idea and come back to Rio the week after to see a parade of the winning teams. Then we thought, "Hey, Salvador is supposed to have a great Carnival as well, let's go there."  Just so you know in case you are ever thinking about going to Brazil for Carnival and want to just go for a couple days and stay somewhere cheap, it is pretty much impossible.  From what we could find, in the major cities every place has a minimum stay of 6 nights, and the prices skyrocket.  So then we decided to scrap the idea of going to Carnival in Brazil and would instead head north to Fortaleza (where there are supposed to be some amazing beaches) and make our way south to Rio, essentially spending several weeks being beach bums along the coast of Brazil.  But after having lots of down time in the Pampas, Sam and I realized that we were no longer super excited about the prospect of several weeks relaxing on the beach.  Then combining that with the fact that we would be spending either hours traveling via bus (tiresome) or flying (expensive) to travel through Brazil which is huge, mixed with the fact that neither one of speaks Portuguese, we decided to nix our Brazil plans and to stay in Bolivia longer.

We had been planning to come to La Paz for a few days after the Pampas, take a bus to the town of Cochabamba so I could meet up with someone I went to high school with, then fly to Brazil.  However, as wonderful as it is to see all of these amazing sites, it is tiresome to constantly be on the go and to sight-see almost every day.  We realized one of the things we loved about Sucre was we were actually doing something everyday (Spanish classes) instead of seeing something everyday.  Don't get me wrong, we are so thankful to have this opportunity to travel and love that we have been able to see so much of Bolivia, but we needed a break.  So we decided to stay in La Paz a little longer, do a little more sight-seeing, go to Cochabamba for a week so we could take more Spanish classes, and then go to be what is supposed to be the best Carnival in Bolivia in the town of Oruru.


Anyway, to back up, in addition to what Sam mentioned in his last blog post, we decided to book two tours through the travel agency at our hotel.  Although a little pricier than other tours, it was nice to treat ourselves to an upgrade, and we ended up with an amazing guide (Eduadordo) for both trips, plus (inadvertent) private tours and a stay at a gorgeous hotel overlooking Lake Titicacaca.


Last Sunday we went on a tour of the pre-Inca ruins of Tiwanaku, which is about 1 1/2 hours outside of La Paz.  They are still being excavated, and it will likely take some time because it is so expensive, and thanks to the Spanish a lot of it had been destroyed.  Their farming and irrigation techniques sounded pretty impressive (so much so that they are trying to replicate them in the surrounding town today).   But what was most impressive was the way the structures were built.  What remains is built from solid stone from quarries in the area.  Huge, heavy blocks of stone that are perfectly cut. The only tools they have been able to find are not strong enough to cute the stone, so they are not entirely sure how they did it.


The next day we left for a 2-day tour of Lake Titicacaca, Copacabana (the town on the Bolivian side of the lake), and Isla del Sol.  Much like Uyuni, Copacabana is full of tourists, but it had a beautiful church that the Spanish built in the 16th century, the biggest one (if I remember correctly) in Bolivia since Lake Titicaca is very important.  There we had the opportunity to watch a priest bless several cars and motorcycles.  We found out that people will drive for days from all over Bolivia and Argentina to Copacabana to have a vehicle they just purchased blessed.  The decorate it beautifully with flowers and set off fireworks after the blessing. 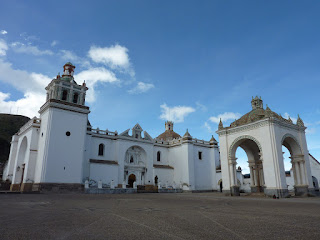 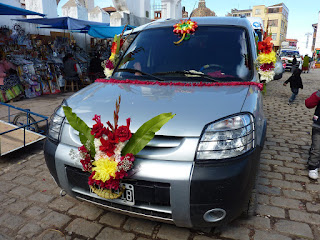 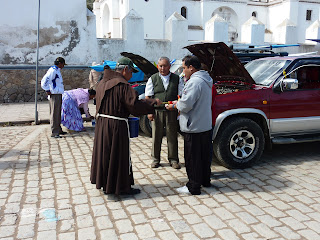 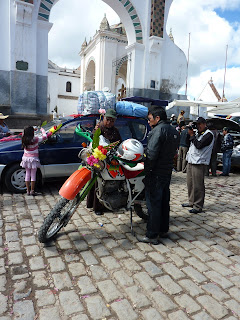 The highlight of the time there though was seeing the lake, which is immense and stunning blue. 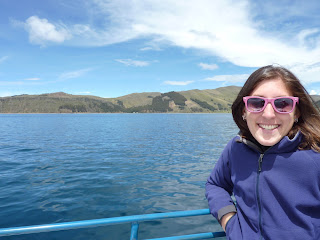 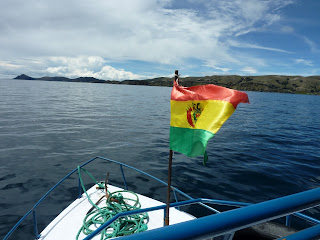 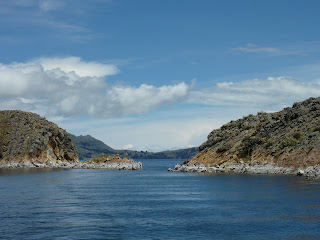 It is the highest lake in the world, and is important for agriculture in the area, in addition to providing fish for people to eat and sell. We visited the southern side of the Isla del Sol (Sun Island), where we saw some more ruins (from the transition period between the time of Tiwanaku and the Incas), got to pet a llama, as well as saw donkeys, pigs, dogs and alpacas. 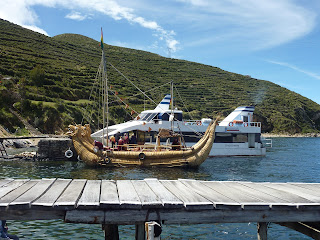 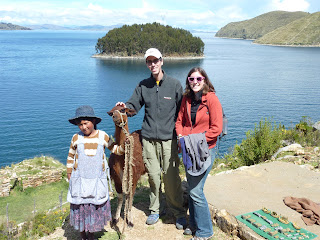 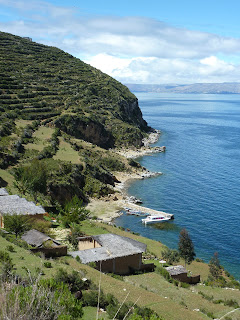 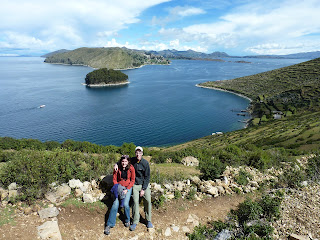 We spent a night in the sister hotel of the one we had stayed in La Paz.  As amazing as that one was, this one was even more incredible.  One wall was basically windows that overlooked the lake and we had a crazy bathroom that was also all windows. 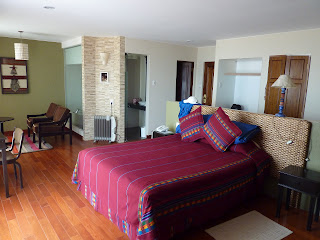 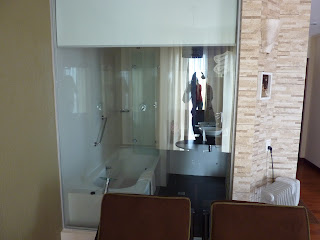 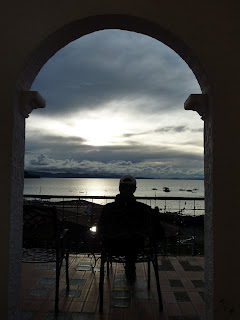 The second day we returned to La Paz and took an overnight buscama (sleeper bus) to Cochabamba.  It was (unsurprisingly) chaotic in the bus terminal and wasn't quite clear which bus was ours since they seemed to come every 15 minutes and ours wasn't in the gate they said it would be, but it was a pretty awesome bus (by far the nicest bus I have every been on with big, comfy seats and recline almost completely).  Of course as we settled in started to go to sleep they decided to blast a movie starting at around 11:30 pm, but neither one of us would have been able to get a super great night of sleep anyway.


Overall a good bus ride (yay for paved road!) and it is nice to be in a flat city at a lower altitude.  The weather is probably the best we have seen on the trip--basically like early summertime (when it's not raining) at home.  Plus, because Cochabamba doesn't seem to have hostels with a kitchen guests can use and I needed a break from eating out for every single meal, we decided to rent an Apart Hotel, which is what it sounds like--a hotel with apartments.  It's a bit dated and the water comes out kinda yellowish ("It's just earth, it's normal!" according to one of the guys who works here, but safe to use after it's been boiled), but it is sooooooo nice to be able to cook again and also have some space to spread out.  It is also great to have a bit of a routine again and not feel like we constantly need to be seeing things, plus we have people to hang out with again!  We have already gone out two nights in a row, first with other students and then with a high school classmate that I hadn't seen in the nearly 12 years since we graduated.  Basically life is good right now and I think Sam and I don't feel quite so much like we are gonna rip each other's head off as we had been in the days before we arrived :-)