Big thank you to Luis for being an amazing host to us in Bogota! So lets talk about our little adventure before we got to Bogota:


The morning we're supposed to fly out to Bogota from Guayaquil, Ecuador the paper in our hotel says "Terror and Death Yesterday in Bogota!" Oh crap!! After worrying about our immediate safety for a few minutes we start to think about what's going to happen when our parents see this story. So we quickly scan the NY Times for a mention, and thankfully there's nothing about this story.


It's important for folks to understand that Colombia used to be very dangerous in the 90's. Unfortunately Americans still have that idea stuck in their head (which isn't true anymore), and as a result there are hardly any tourists around. Currently the country is very safe, assuming you don't go to the jungle region where the guerrillas are still active. The bombing that happened just before we arrived was a targeted assassination attempt at a minister that was super oppressive to the guerrillas 8 years ago. What's most important to know is that the bombings have never had the purpose of killing civilians.


Ok, back to us in Ecuador. We headed to the airport, which by the way is really nice. There's also a koi pond where you can get fish food. First time seeing something like that in an airport. While waiting in the airport we get an email from Luis saying that he hasn't heard from Boris yet (for those not in the know, Bobo came to visit us in Bogota for a week!). Boris was supposed to get in earlier in the day. Hmm, nothing we can do from Ecuador.


We get into Bogota that night, buy a sim card and get in a cab. It's nice that in the airport the cabs have a ticket window that gives you a receipt telling you how much your trip will cost (so you don't have to worry about getting ripped off). We make it to Luis's and find Boris there already. That night we had our first of many arrepas, a delicious fried cornmeal flat thing. Mmmm.


The first day we were in the city, Luis showed us around downtown and took us up to the cool overlook. 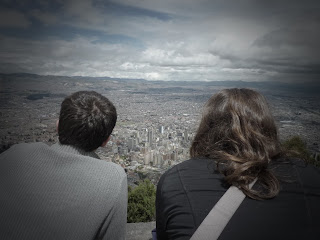 The next day we walked more around town and saw the Botero museum. 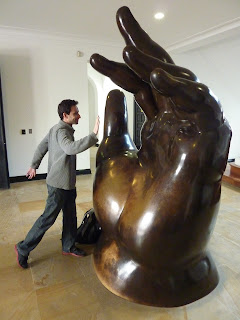 We walked around downtown, which had all the government buildings and such. The city has a lot of graffiti everywhere, which unlike Valparaiso, Chile, isn't particularly artistic or in the forms of murals. Just a lot of tagging everywhere. The city was also kinda dirty, which is probably because it is massive, but also leaves kinda a gross impression.

That afternoon we met up with Luis's girlfriend and went to eat pastries at this amazing bakery. Not only did our pastries all include champagne, but we got to sample a lot of cakes. It was ridiculous.

Another night we went to a movie theater that's also a restaurant, to watch a French movie dubbed in Spanish. To say that we were very confused was an understatement.

We also checked out the Zona Rosa, the really trendy part of town with fancy stores and upscale restaurants. I got to get a beer at BBC, my favorite brewery back home!! Unfortunately it turned out not to be the Berkshire Brewing Company, but instead the Bogota Brewing Company - still good beer.

More pictures!
Posted by Unknown at 11:02 AM